The Keep is the name of the new East Sussex archive which is currently being built near Falmer, just outside Brighton.  It will replace the current record office which is at the Maltings in Lewes.  It won't be open for another year (at the earliest) but I got to see around it earlier this week and its looking good! 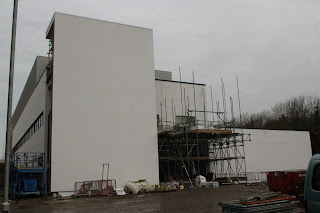 The main entrance (hidden by scaffolding) 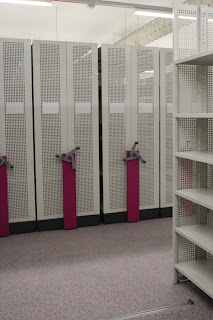 Shelving in the repository - there will be 6 miles of shelving in total! 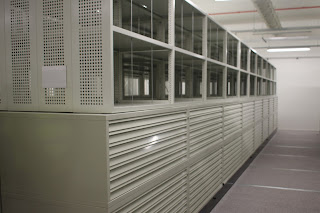 More shelving - this time for maps 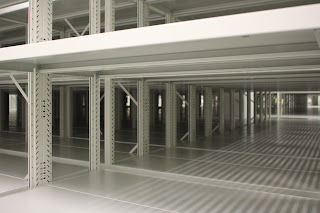 and much more shelving 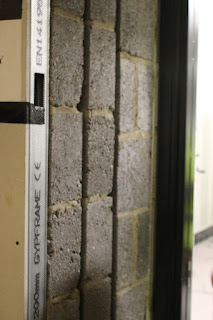 The walls of the repository are thick to help maintain the temperature inside in order to protect the documents. 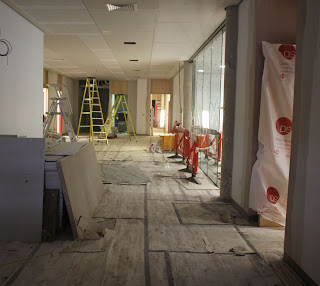 The hallway - the entrance to the search room is on the right.

There should be seating here so that you can eat lunch and have a drink. 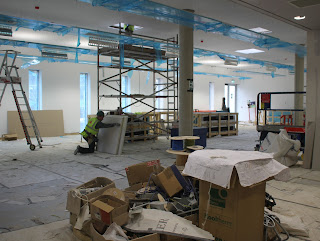 This will be the searchroom - to the left of the photo is the same space again separated by glass to make a more secure search area for viewing original documents. 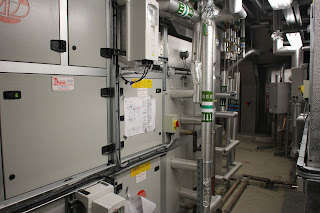 There is a lot of shiny stuff which will run the building, helping to keep the repository at optimum temperature - there is also a separate building with a bio mass boiler.

This is the room which is of particular interest for me.  This is where the library for the Sussex Family History Group will be located, just off the search room.
(apologies for the photo quality)

For more information on The Keep see the East Sussex Record Office website.

Posted by Sussexbythesea at 19:18 No comments:

The war memorial in Herstmonceux church lists the men of Herstmonceux who died  fighting in the First World War.  It is an alphabetical list but at the bottom another name was added - that of C J Burchett of the Royal Sussex Regiment.

Charles John Burchett was born on the 20th April 1892 in Herstmonceux, one of the children born to David  Robert Burchett and Harriet (nee Hunnisett).  His family can be traced back in Herstmonceux for many generations and he was a cousin of William Henry Burchett who is also listed on the war memorial (Charles's father was a brother of William's mother).  He attended the local school and then worked as a gardener before he began making trugs (a local industry Herstmonceux is well known for).

Colonel Lowther of Herstmonceux Castle got permission, soon after the start of the First World War, to raise a battalion of local men; over a thousand men signed up in the first few days including Charles Burchett and his cousin William Henry Burchett.  Having joined the Southdowns Battalion Charles was transferred to the Royal West Kent, although when and why is unknown.  His cousin William was killed on the 3rd September 1916 on the Somme and is buried at Ancre British Cemetery and is also remembered on his parents gravestone in Herstmonceux graveyard.

Charles survived the fighting and returned home to Herstmonceux where his mother had been widowed two years previously.  He took up work as a trug maker but died on the 21st December 1919 from pulmonary tuberculosis (TB), little more than year after the end of the war.  TB is an infectious disease which had only been recognised as a contagious illness in the late 19th century and as an airbourne disease it passed quickly amongst soldiers living in close proximity whose immune systems were already weakened as a result of living in trenches in less than sanitary conditions.

Charles was buried in Herstmonceux graveyard on Christmas eve 1919, the parish magazine of February 1920 reported that "Mrs Burchett wishes to thank all kind friends for their sympathy in her bereavement and also for the beautiful flowers which were sent to her".

Charles John Burchett may not be one of those who officially died in the First World War but there can be little doubt that he died as a direct result of the war.

With thanks to David Lester - see his website for more information on the Southdown Batallions
Posted by Sussexbythesea at 15:34 No comments:

Email ThisBlogThis!Share to TwitterShare to FacebookShare to Pinterest
Labels: Herstmonceux

Bonfire night is something which is taken quite seriously in Sussex especially in Lewes which is known as the bonfire capital of the world.

Bonfire night is the night the country celebrates the failure of Guy Fawkes and his companions to blow up the Houses of Parliament in 1606, although after 400 years it has evolved into more of a social occasion with a fireworks display.

In Sussex bonfire night also commemorates events nearly a hundred years earlier during the reign of Queen Mary.  Henry VIII had set in motion the change from the Catholic religion to a Protestant one, his son Edward VI had taken the reforms further so that when he died in 1553 we were no longer a Catholic country.  Edward's sister Mary who now became queen, however, was Catholic, and she set about returning the country to that religion.   In her attempt to do that she executed, mostly by burning, about 283 Protestants including bishops and the archbishop of Canterbury.  This action only made Protestants more stubborn and fed their dislike and distrust of Catholics; those who were executed became martyrs.

Seventeen of those martyrs were burnt on the High Street in Lewes  outside the Star Inn (now the Town Hall) so bonfire night doesn't just celebrate the failure of another Catholic plot it also remembers those seventeen martyrs and there is still an anti-Catholic feeling to the event with the annual burning of the pope (the pope of 1605 rather than the current pope) and Cliffe Bonfire Societies "No Popery" banner.  A burning cross for each of the martyrs is carried through Lewes on the night of the 5th November.   The Mayfield bonfire night commemorates two local residents who were burnt in Lewes and another four who were executed in the village itself.

Initially events were random and unorganised but in the 19th century Bonfire Societies were set up in many towns in Sussex; Lewes currently has six Bonfire Societies and there are 30 others around the county.  Because of the large number of societies it is not possible for them all to hold their events on the 5th November so the bonfire season begins in September in Uckfield and ends late in November in Robertsbridge and Barcombe.  The parades through towns tend to be very noisy and colourful, with torches, traditional costumes and fancy dress, bangers, bands and burning tar barrels, all of the Bonfire Societies attend each other's parade and the events can go on until late in the night.  Quite why bonfire night has become as important as it has in Lewes and Sussex is not clear but there is a lot of history involved as well as current issues which usually influence the effigies burnt on the night and often cause controversy - George Bush and British Transport Police were burnt in 2006, 'fat cat' bankers in 2009, Firle burnt an effigy a gypsy caravan complete with occupants in 2003 (arrests were made for inciting racism), Cliffe Bonfire Society had an effigy of a seagull in 2007 (objecting to the building of the new Brighton & Hove football stadium on land designated as an area of outstanding natural beauty) and others burnt include Osama bin Laden, Condoleezza Rice, Ulrika Jonsson, Steve Irwin, Tony Blair and Saddam Hussein.

This is a description of bonfire night in Forest Row in 1912(1):

Bonfire Carnival - The village of Forest
Row was en fete on Wednesday on the occasion of
the Bonfire Carnival.  Crowds of people from East
Grinstead and the surrounding district flocked to
the village to enjoy the revelries and the pro-
cedings were of a boisterous, good humoured
nature.  A procession was formed outside the
Brambletye Hotel and consisted of a very motley
throng.  A Chinaman led the way, followed by a
cowboy, Dick Turpin and what was evidently
intended to be a foreign officer of some description,
each on horseback.  Then came the Forest Row
Band, while in its wake followed soldiers, police-
men, clowns, cowboys, Indians and other characters
galore.  There were several original dresses
including "Black and White Whiskey", "Bass",
"Winter Billards", "Father time" &c.  The route
taken was to the Vicarage and past the church,
along the Hartfield road and from thence back to
the Brambletye.  The procession, lighted by torches
and coloured fire, presented a very pretty appear-
ance, although the rather heavy atmosphere caused
a considerable amount of pungent smoke to
accumulate.  Despite the presence of a number of
local policemen, fireworks were surreptitiously
discharged in the streets.  On the return of the
processionists to the Brambletye Hotel the fancy
costunes were judged the Mrs McGuiness...
A large bonfire was afterwards lighted
at the rear of the Brambletye Hotel, while a
splendid firework display was also given, including
the sending up of four fire balloons. 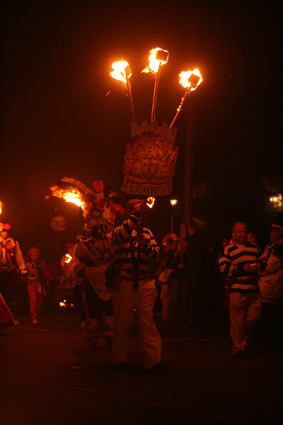 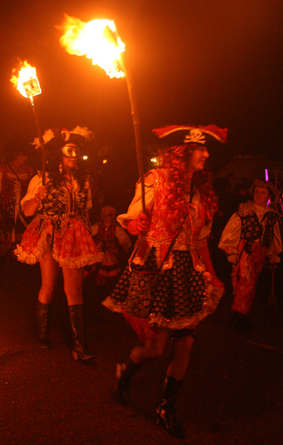 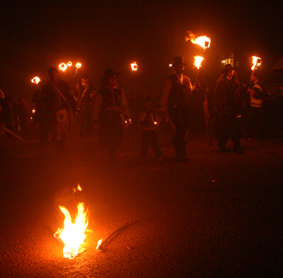 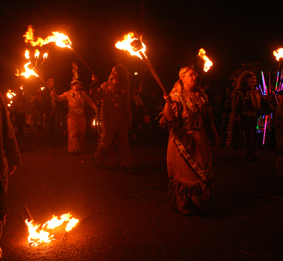 Images from the procession in Mayfield in 2010 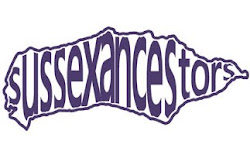